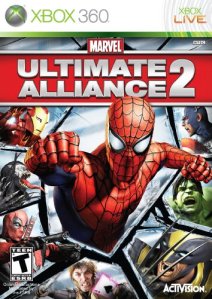 This weekend I had an opportunity to play Marvel Ultimate Alliance 2. I only played the first Marvel Alliance briefly and will get to a Late To The Game review of that game soon. I was excited about this game though when I heard about it. I am big comic book fan and especially so for Marvel comics. I grew up in comic shops as a kid. My dad owned a comic book store and comics were our way of bonding. While other kids were reading books like they were supposed to I was plowing through piles of comics learning the secrets of these awesome worlds full of adamantium claws and web slinging. Marvel Ultimate Alliance 2 let me take the best of these characters and have them team up to ultimately fight each other. That is a pretty awesome way to start in my book.

Overall this game wasn’t so bad. As far as games go it looks good, the cut scenes are pretty sweet and the gameplay is solid. They definitely did a nice upgrade to the overall character design from the first game. The game is pretty cut scene heavy to drive the story forward. Some people argue to get rid of cut scenes in games but I think Marvel Alliance 2 uses them appropriately. When there was a need for action, I got to do it. When they wanted to regal me with decent voice over and cool animations I got my fill with the cut scenes.

Gameplay was really simple. Pick a super hero and three other heroes you want along for the ride and then pound those buttons for your powers to blow shit up. You can switch between heroes and doing so is encouraged because you unlock achievements and rewards only when you are actually controlling a particular hero. Even though it is encouraged I stuck with one character the whole play through, switching out only when I got knocked out. May I recommend Johnny Storm, the Human Torch. His powers are fun to use setting the world and your enemies on fire. Your enemies tend to use a lot of fire against you as well which you are immune to because you are the Human Torch. Fusion powers with other heroes are pretty cool as well. I am guessing there a number of combos to choose from but I stuck with the same party all the way through. Basically Fusion powers let you team up with another hero in your group for a super attack. An example would be the Human Torch and the Incredible Hulk. The Hulk rips a chunk of the earth from the ground and the Human Torch super heats it up for the Hulk to serve to their targeted enemy. A couple of those Fusion attacks and most villains are toast.

Did I mention it had a really good story? That is pretty much what drove me to finish the game. I was doing something else with my life and not reading comics when the Civil War storyline was going on in the Marvel Universe. I got bits and pieces of it from my friends and what I read on the internet but it was nice to get a simple retelling of the story in a video game. The writers of the game do an excellent job of setting the mood and pacing of the story. Conversations were an interesting idea which I felt fell flat. You had three options for most conversations aggressive, diplomatic and defensive. Choosing one of the options gave you points towards one of the many buffs in the game. Other than that the outcome seemed to be pretty much the same. I get the sense that there was  more intended originally but it got cut. Still the false sense of choice was more choice than some games.

Marvel Alliance 2 is not the longest game I have ever played. I was able to beat it in about 8-10 hours.That was with watching all of the cut scenes and no skipping. I am guessing a second play through could get me through it all in about 4-6. It has replay value in that the story diverges in one place so it would be interesting to see how the game plays out given the other choice. Add in the options to play with different team configurations and collecting the different set items for buffs in the game you then have a pretty solid source of entertainment.

The levels are well designed and give you ample direction and room to explore. There were lots of visual clues to let me know where I needed to go and only once did the locked camera make it tough for me to figure out where one of the paths was. A few hidden areas with buffs and collectables are on every level and if you are a completionist you will be driven to look for them. On this play through I was more interested in seeing how the story unfolded more than finding buffs which by the end of the game were unneeded to win.

The variety of characters was limited but I guess sufficient. The game had Deadpool and really thats all I wanted till they make an all Deadpool all the time game. There were a variety of X-Men, Fantastic Four and C level characters like Luke Cage and Iron Fist to choose from. I would have liked to have seen more villains to pick from. You eventually get Green Goblin and Venom but they are pretty meh to me. The fact that some characters were limited to certain consoles is kind of annoying. I don’t mind incentives like specialty items being only available to certain consoles but actual character choice is pretty lame. I am sure in time DLC will have these and more characters. There already is one DLC that gives you  access to Carnage and Black Panther which I will probably pick up.

The only real thinker part of the game were the boss battles. Now boss battles ranged from simplistic to annoying. Fighting people like Justice was just a pound fest. Target the enemy and hit him with everything you got and repeat till defeated. When it wasn’t just a prolonged normal fight there was sort of a strategy involved. Usually this ended with more frustration than actual fun. An example can be found in a battle with Bishop. This character absorbs energy. I repeat ABSORBS energy. You spend 3/4 of the battle fighting him to no avail only to wait for certain moments when he recharges health again to stun him. Really? Really? Yes, really. Don’t even get me started on Hank Pym aka Yellowjacket. At least Havok goes down like the bitch he is. /Rant off.

All that said about Marvel Ultimate Alliance 2 I give the game 4 out of 5. A good story, solid controls, and the ability to play some of my favorite Marvel superheroes.